What foods are naturally high in iodine? Iodine is a component of almost every living plant and animal. No standard measurements of iodine in food exist because iodine concentrations vary across the world. In general, foods from the sea contain the most iodine, followed by animal foods, then plant foods. Of all foods, seaweed (like kelp), is the most well-known and reliable source of natural iodine. Egg and dairy products can also be good sources.

Select Food Samples for Iodine Content
Other than fortified salt, the concentrations of iodine in these foods can vary widely and this table should be taken as a rough guide.

*A three-ounce serving of meat is about the size of a deck of cards.
Source: Linus Pauling Institute Article on Iodine

How much iodine do I need? In your entire lifetime you will need less than a teaspoon of iodine to ensure good health, however, since it is dangerous to consume that much iodine at once, it is best to eat a little each day. You only need 150 micrograms (mcg, mcg), or 20,000th of a teaspoon, to meet your daily requirement.

If iodine is in most plant and animal foods how can anyone be deficient? According to the World Health Organization, iodine deficiencies exist in 54 countries as of 2003. 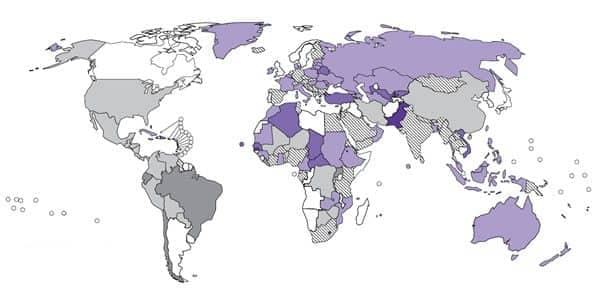 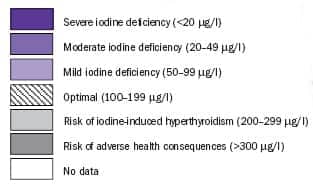 There is no exact answer as to why iodine deficiencies occur, however, two theories exist:

Some countries, like the U.S., show a risk of excess iodine intakes which suggests overconsumption of foods fortified with iodine, such as iodized salt.

Is too much iodine good or bad? The tolerable upper intake for iodine is set at 1.1mg (1,100mcg) for adults 19 years and older. Risks of high iodine intake include hypothyroidism, hyperthyroidism, and goiter. Really acute iodine poisoning can lead to burning of the mouth, throat, and stomach, fever, abdominal pain, nausea, vomiting, diarrhea, weak pulse, and even coma.(5) With that said, some studies suggest that intakes of iodine is up to 1.2mg (1,200mcg) per day, and can confer health benefits, including cancer protection. Japanese people get most of their iodine from kelp seaweed. Please consult your doctor before taking high doses of iodine, do so with caution, and for limited time periods.

Is there Iodine in Breast Milk? New mothers should be aware that their breast milk contains iodine for their newborn children. The amount of iodine in breast milk will depend on the mother's diet. A 1984 sample of women from the United States found the average concentration of iodine excreted in breast milk to be 114mcg per day. This more than meets the adequate intake requirement of 110mcg per day for infants ranging 0-6 months, but falls a little short of the 130mcg per day requirement for infants ranging 7 months to 1 year. This should not necessarily be taken as a cause to eat a lot more iodine on the part of lactating women, as too much iodine can also be harmful.

I don't eat salt, meat, or seaweed, where can I get iodine? Your options are to consider supplements, buy foods enriched in iodine, or ensure that the plant foods you consume come from parts of the world where the soil is rich in iodine.

MyFoodData provides free nutrition data tools and articles to help you organize and understand the foods you eat.

Create a free account to get nutrition facts on recipes and meals, track foods, and set custom targets.